The last two years have seen an explosion in JavaScript-related searches that is nothing short of remarkable. All signs point to ECMAScript 6, EC6, being viewed as a major milestone, and indeed, it is clearly a driving force behind major updates of popular JavaScript Frameworks such as Angular 2.

If you happen to develop in JavaScript, here is what you need to know.

JavaScript is just one of several implementations of ECMAScript, the standard-bearer.

According to GitHut, a service that tracks the activity of users of GitHub, the popular hosted version management platform based on Git, JavaScript is the No. 1 among popular programming/scripting languages based on the number of active repositories (currently in excess of 300,000) and total pushes (edging towards 3.5 million). JavaScript is currently the rising star when it comes to web and app code, alongside JScript and Adobe’s ActionScript.

ECMAScript 6 has brought a variety of new features that developers have longed for, and it has already spawned a wave of innovation, such as the next generation of Google’s AngularJS.

Googles AngularJS framework in its second generation is expected to hit final version any day between now and the Google I/0. It is a brainchild of engineers from Google and Microsoft, in addition to contributions from the community. Google and Microsoft teamed up when Google took liking to Microsoft’s TypeScript and their cross-platform developer tools and Microsoft jumped at the opportunity to extend its reach among JavaScript folks. Thanks to Microsoft’s willingness to cooperate by extending TypeScript with additional features specifically tailor-cut to Angular (some of which were previously provided by Google’s now-discontinued AtScript), Google was able to write Angular 2 from scratch in TypeScript. The result is a performance boost of a 8x magnitude.

Yes, you heard that right: that’s an eight-fold performance improvement over Angular 1.3+. Your existing code cannot match these performance levels (for lack of support for WebWorkers and such). So what are you going to do?

Before you jump head over heels on this new framework, a word of warning: your Angular 1.3+ code cannot take advantage of the improvements that come with Angular 2. You can still write any dialect of JavaScript that you want, basically, but in order to take advantage of the most advanced features, such as JavaScript running inside of WebWorkers, you will need to rewrite your application.

There are currently two alternative upgrade paths: ng-forward (which is currently the default), and ng-upgrade, which allows you to mix code written using each of these frameworks to your heart’s content. 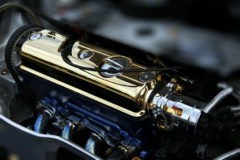